Dedication is the quality of being committed to a task or purpose. Our mission is to be the customer's first choice for innovative water quality management products and fourntains by developing highly motivated and integrated teams while serving our customers and channel partners with the highest levels of quality, honesty, integrity and professionalism.

SIXTY YEARS AGO OTTERBINE pond and lake aeration systems were only available in wastewater treatment and commercial fish farms. In 1980 when Chuck and Terry Barebo purchased the Otterbine line they recognized the need for clean water went beyond industrial applications to include areas such as; golf courses, parks, commercial complexes and any area where people and water connected. With this awareness, they purchased the Otterbine product line and the journey began of providing high quality aeration systems, aerating fountains and underwater lighting to these markets. The Barebo family tradition and commitment of providing superior products and family friendly customer service has strengthened over the years as the second generation, and now the third generation of Barebos have evolved into the business and made a name for Otterbine products through a worldwide sales and service network. Otterbine Barebo, Inc. is recognized as the industry leader in the manufacturing of aerating fountains and pond aeration systems, and they are proud that the Barebo family name goes on every product that is sold.

The Folks at Otterbine, A Dedicated Team

Chuck and Terry spent their pre-Otterbine lives in corporate American. Chuck managed plants and manufacturing facilities. He was good at what he did, but disliked the way he was treated, he did not care for corporate politics and was demotivated by the resources he was given for his team. So, when Chuck and Terry purchased Otterbine they made sure their team had adequate facilities, a good vacation plan, profit sharing and quality health insurance. With that in place, "The Folks at Otterbine" became their new team, and extended family. This team, "The Folks at Otterbine" focused on treating employees, customers and distributors alike with care and respect. The 2nd and 3rd generations have continued this tradition and this caring is evident in all customer concerns being answered within 24-hours, 5-year warranties, and "The Folks at Otterbine" have an average tenure of 15+ years. We take great pride in our history and in being the industry leaders, which is evident in every product! Let us show you the Otterbine difference, and why the only choice in pond and lake industrial pond aerators and aerating fountains is with "The Folks at Otterbine". 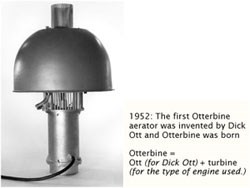 1952: The first Otterbine aerator was invented by Dick Ott and Otterbine was born. The name Otterbine = Ott + Turbine (for the type of machined used).

1978: Concept1 aerators were introduced to the product line

1981: Chuck and Terry knew that Otterbine aerators had much more potential and would work in a variety of applications. They ventured into the Golf and Waste Water markets.

1993: The 2nd generation Carla V. Barebo-Ott, Chris Barebo and Charlie Barebo take over the leadership of the company, and expand the company into Europe, Asia and the Middle East.

Get the Best in Quality & Performance

From Our Products to Our Services, We Continue to Rank #1 in Performance & Customer Satisfaction – Find Out Why!