With the excitement and drama of the 2010 Ryder Cup now a fading memory for some, the excellent planning and preparation work carried out by all of the staff at Celtic Manor should not be forgotten.

Jim McKenzie and his team worked tirelessly in the preceding months to ensure that the 2010 course, purpose built to host this prestigious biennial golf tournament, would be presented to the players, the visitors and the watching world at the peak of condition.

Many thousands of hours were spent fettling the course and it has to be said, despite mother natures very best efforts to wash everyone away, it looked spectacular, especially considering the incredibly heavy traffic that it saw during the tournament.

One small, but vital portion of the preparation works was the lake management program that was instigated by Jim at the famous 18th par 5.

In early 2010, the lake began to exhibit signs of stress and imbalance, culminating in significant algae blooms that became an eyesore in the months running up to the tournament.

Jim realized that the run-off water from the surrounding agricultural land, was creating unnaturally high nutrient loading in the lake, resulting in the eco-system being thrown into crisis so he instigated a pro-active lake management strategy.

Jim decided to re-balance the lake, starting with a complete drain and clean of the affected area. 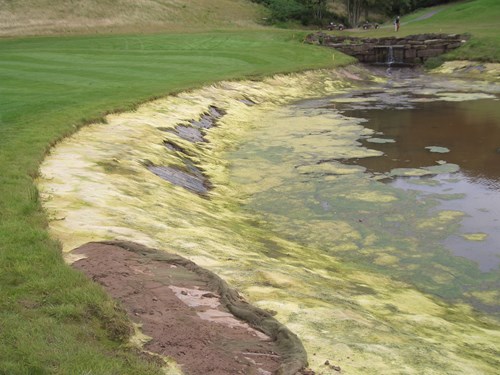 With this completed and the lake re-filled, Jim looked at all of his options. He identified the cause of his algae problems as insufficient dissolved oxygen in the waters and decided that aeration was the answer to what would be an ongoing problem.

Jim called in Otterbine Barebo to propose a solution from their worldwide expertise in dealing with water quality management issues such as this.

Following a series of consultations and a design proposal, the decision was made to aerate the lakes and Celtic Manor invested in two aerators.

The aerators were installed in one day and have been providing uninterrupted water management since then (except when the players came through for the tournament when the units were shut down to prevent any distractions).

There is now an Otterbine 3HP High Volume aerator in the ‘top’ tier lake at the 18th. This aerator has the highest independently tested OTR (oxygen transfer rate) in the industry and is the workhorse unit providing in excess of 4kg of dissolved oxygen per hour. In the lakes lower tier sits a majestic Otterbine 5HP Sunburst aerator adding more than 3kg of dissolved oxygen per hour whilst at the same time providing a superb display feature, especially at night when it is illuminated by the Otterbine lights mounted to the unit. The key to addressing water quality issues is to identify the problem as Jim did at Celtic Manor. As in 90% of cases, the problem was insufficient dissolved oxygen to support the lakes natural eco-system that would ordinarily deal with the nutrients in the lakes. By aerating the water, Jim has ensured that the lake will be in perfect natural balance for many years to come.

Take back control and improve water quality with Otterbine today!