Where Safety is Concerned: Diffused Air Systems Create A Difference!

There is no doubt that property managers and owners are continually looking for effective ways to properly manage their ponds or lakes. Factors such as allotted budget, current condition of pond, and available work force must be taken into consideration for any pond maintenance program, but owners of large ponds that are used for recreational uses also have additional issues to contemplate. For instance, using chemicals may be hazardous, grass carp can contribute to nutrient overload, and installing an aerator or aerating fountain may be cause for concern due to the moving parts or electricity in the water. While these are certainly matters worthy of much thought, there is little need to fret as there is a simple solution that keeps ponds and lakes clean and clear without the use of chemicals and without the need of motorized mechanisms. This resolution is the often overlooked diffused air system.

Fine-bubble diffused air systems first became popular in the 1970's and have since created a topic of wide debate over the aptitude of their effectiveness. While it has been proven that in less than 6 feet of water, diffused air systems are not as effective as other types of aerators, research has shown that if placed accurately diffused aerators can be very effective in maintaining a healthy water body. They can also be beneficial in ridding a pond or lake from symptoms of oxygen depletion such as odor, discoloration, excessive algae, and fish kills. In fact, some argue that diffused air systems are the best option to aerate deep ponds. 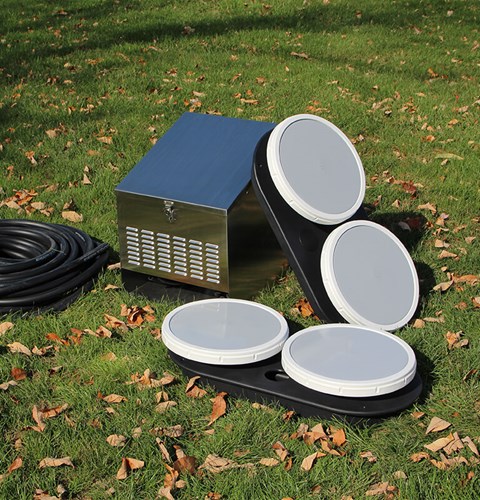 The success of the diffused air system is held in its simple design. Each system comes equipped with three main components; an air compressor, an air hose, and a diffuser (which can come in the form of diffuser stones, pads, tubing, diaphragms, etc....) The diffuser is strategically placed on the pond bottom after being attached to the air hose, which is affixed to the air compressor. The air compressor is located on-shore and also houses the electric motor. The compressor pushes large amounts of air through the hose and as the compressed air is squeezed through the diffuser, the result is thousands of air bubbles scrambling at an approximate rate of 1 ft (30 cm) per second from the bottom of the lake to the surface. In this instance, the bubbles not only transfer the bottom water to the top, creating circulation and de-stratifying the pond, but also replenish the oxygen supply throughout the water for aerobic bacteria which in turn rid the pond of noxious gases such as hydrogen sulfide and ammonia. Moreover, on the surface of the lake the bubbles create a smooth rippling effect which deflect sunlight from reaching the pond bottom, thus deterring algae growth.

As with any type of aerator efficiency of the diffused air system depends on a few factors. In this case, the most predominant are the size of the bubbles being dispersed and the depth of lake. Proper placement must also be carefully evaluated. 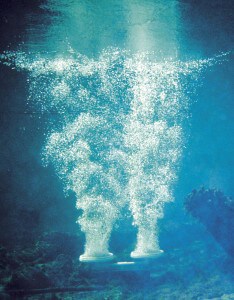 As a general rule of thumb, researchers agree that the smaller the bubble, the more effective the system. This is primarily due to the fact that smaller bubbles tend to stay in the water longer, and a greater residual effect is achieved. So, a greater surface area of the water is influenced by the bubbles as they spread while rising to the surface. On the other hand, larger, courser bubbles tend to rise to the surface quicker and as opposed to a smaller bubble, leave less time for oxygen to dissolve in the water. 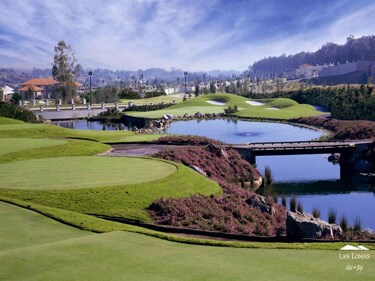 Size and Depth of Lake

The motion of bubbles to the pond surface has the capacity to move an enormous amount of water, estimated between 5000-8000 pounds per hour, within the lake. Water circulation, then, will increase as the depth increases. So, obviously the greater depth of a pond or lake, the better the water will be mixed and aerated. Scientists have determined that the peak efficiency depth is 15 feet and studies indicate that for every 3-foot decrease in depth, the system's relative efficiencies drop about 50 percent. 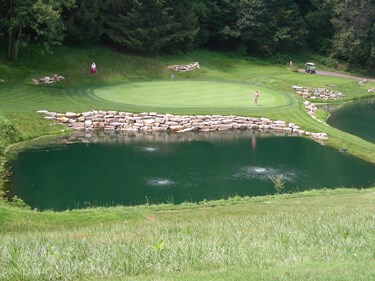 Proper placement of the diffuser is also highly relevant to the effectiveness of aeration, however, this matter is very site-specific. Since most ponds have varying depths and many are designed with "dead spots," it is sensible to have a professional examine the site to determine where to place the diffuser so it will be both efficient and effective.

One of the greatest benefits of the diffused air system is that it neither uses any moving parts nor electricity in the water, and therefore is safe for visitors to the pond such as swimmers, children, fishers, and pets. For these reasons, it is of the most popular aeration devices used in large ponds. The thousands of tiny bubbles that are produced by the system are effective in aerating large bodies of water as well as deterring algae growth odor, fish kills and discoloration, so in most cases there is no need for the additional use of chemicals or algaecides. Furthermore, because diffused air systems are kept in place using weighted tubing, they are sure not to interfere with row boats or fishermen. At last, diffused air systems may be the solution to your large pond concerns!

Find out how an energy efficient aeration system from Otterbine can provide natural and effective water quality solutions. Talk to us about your commercial needs.